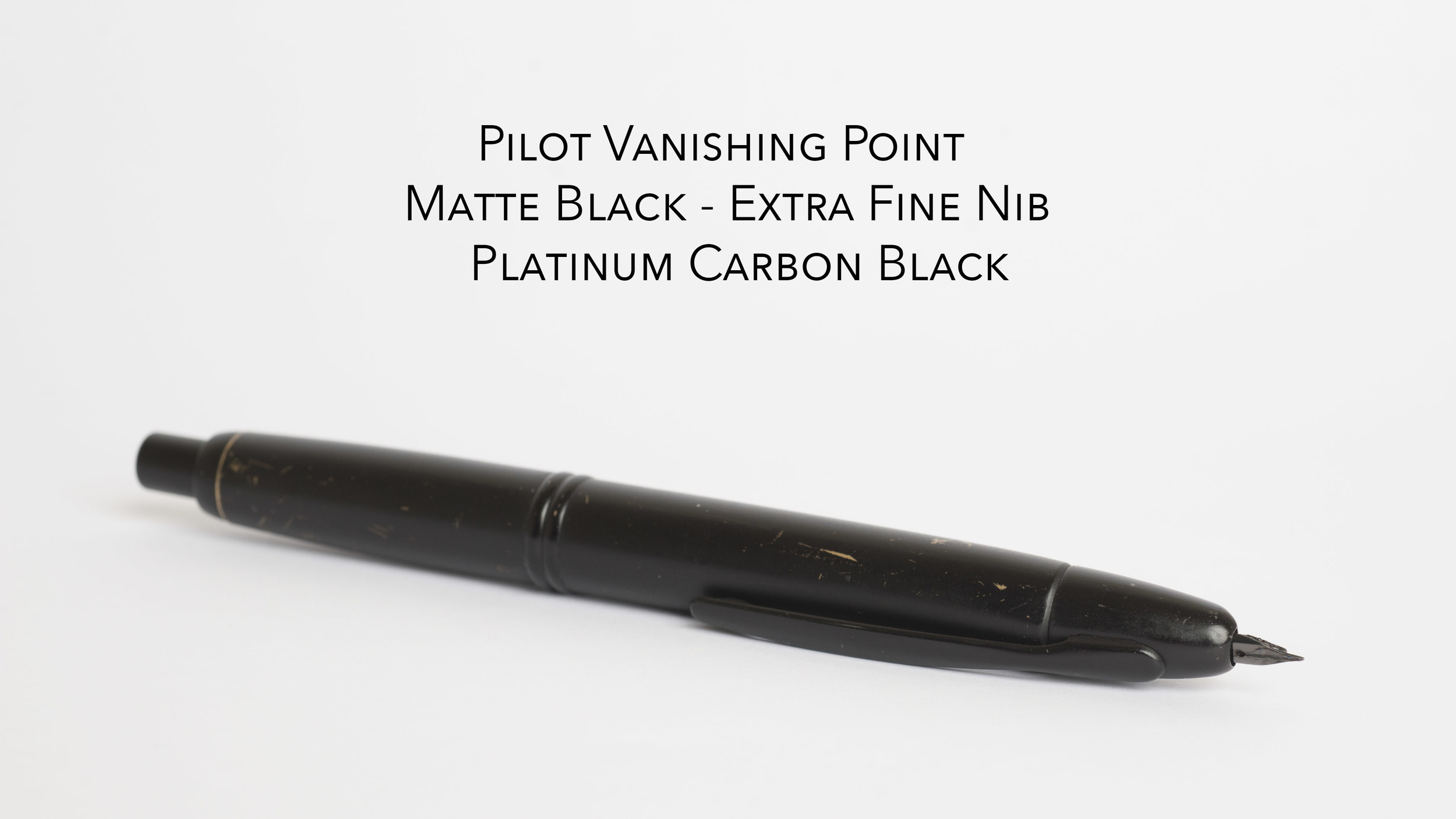 I gave a quick look at my beat up Vanishing Point in my Every Day Carry post last week but I wanted to talk a little bit more about why I love that pen so much.

The matte black Vanishing Point was my grail pen from the moment I saw it. Fountain pens are already unusual enough to see out and about, but a retractable fountain pen (?!), I had to have it. It took me the better part of year to pull the trigger on it, but in 2014 I bought it for myself for my birthday. It's been a constant companion of mine ever since. 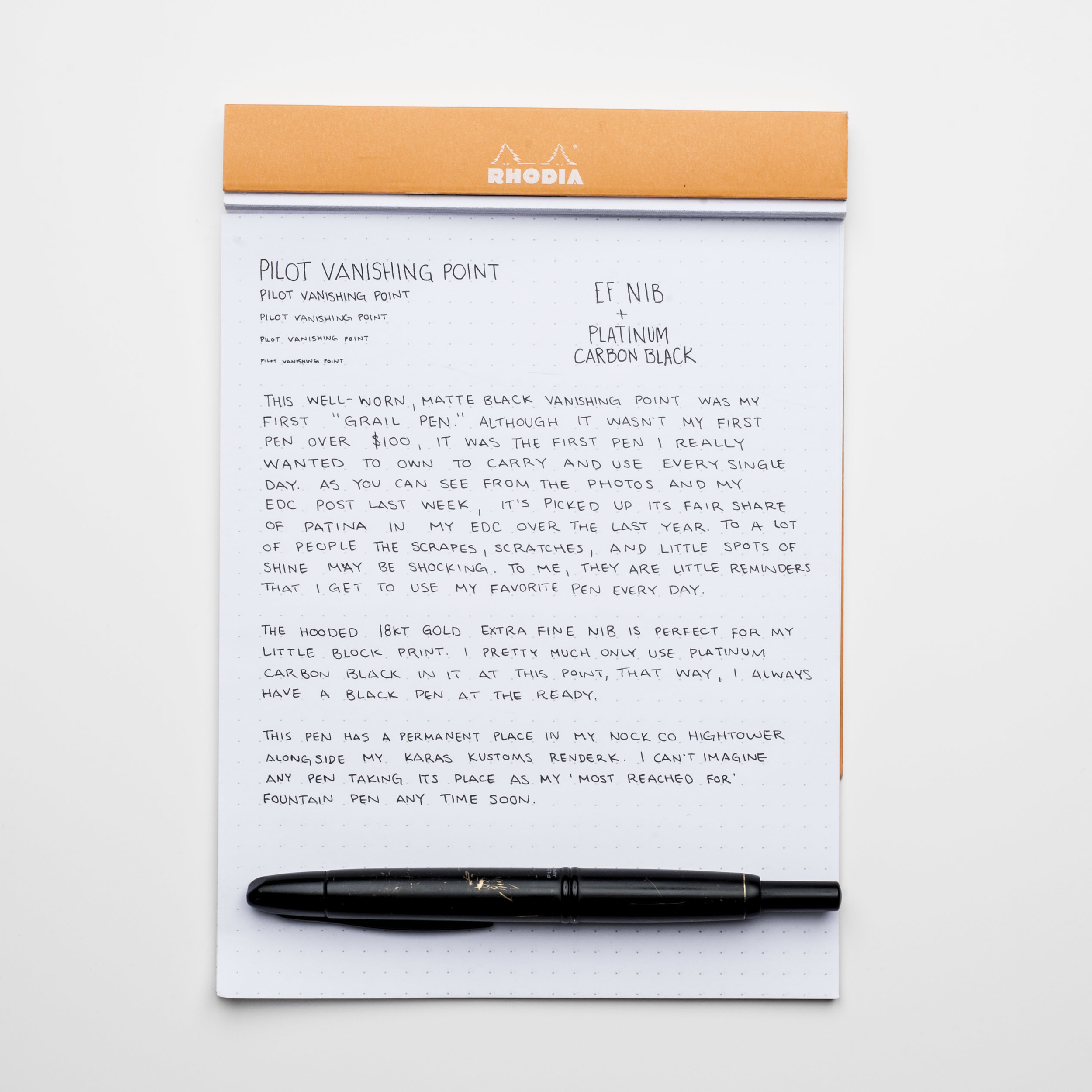 Starting at the top is the incredible knock: the clicky mechanism that makes this pen so unique. Over the weekend I handed the pen to someone who had never seen a Vanishing Point, she clicked it open and remarked, "That is such a solid click sound, it feels really nice." The fact that I never have to worry about losing a cap or having the pen click open is great, given that this pen splits time between my pocket and a Nock Co. Hightower.

A year in to my Vanishing Point ownership, and you can see that it is sporting some pretty serious patina. For the first few weeks, I babied the hell out of this pen. I was terrified to scratch the black coating or use it so much that it started getting shiny in places. The more I used it, the less afraid I became of damaging it. I bought the pen to use it, dammit, that's what I'm going to do. Some of the scrapes have come from riding in my pocket next to a Karas Kustoms RenderK, others from tumbles off tables. There is no point in babying a tool like this. Pens are made to be used. 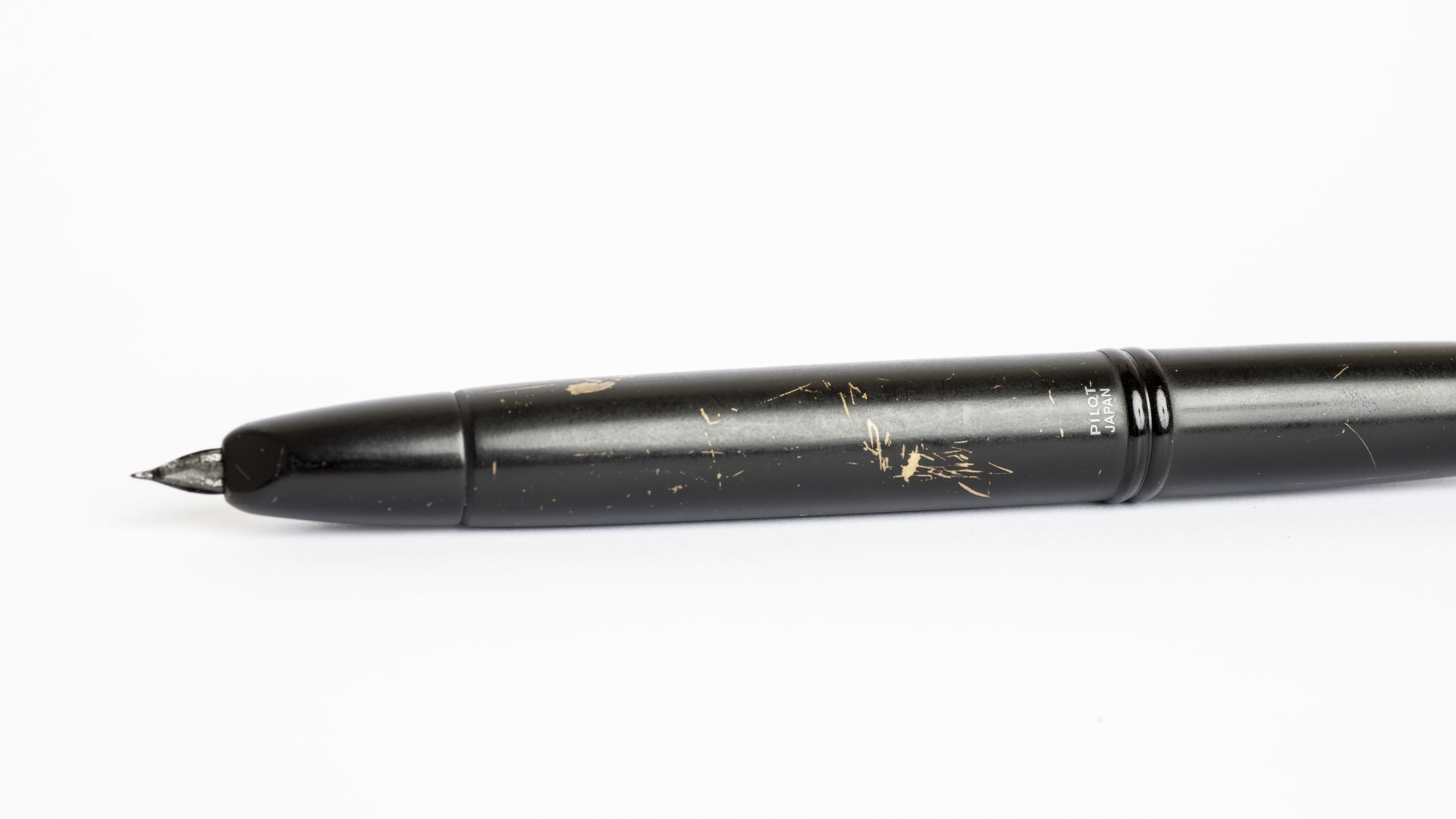 I have the black-ionized 18kt gold nib in extra fine in my Vanishing Point and it is one of the smoothest nibs in my collection, second only to the Pilot Falcon SF. Japanese EF nibs are not for everyone, but for my tiny block print this nib is a perfect match. In my Field Notes or Doane memo books, the nib is smooth and limits feathering, and on better paper, like Rhodia or the Tomoe River in my Hobonichi, it really shines.

The fact that the nib units are entirely removable is astonishing. I’ve been seeing some awesome Architect Grinds on Instagram recently, and it probably won’t be long before I pick up a second nib unit for some variety.

For some people the position of the clip within the grip can create some issues. I have no qualms with the far more polarizing grip on the venerable Lamy Safari (my first fountain pen ever) I didn’t think I’d have any problems. My grip is pretty traditional and I have yet to experience any fatigue or pain during long writing sessions. 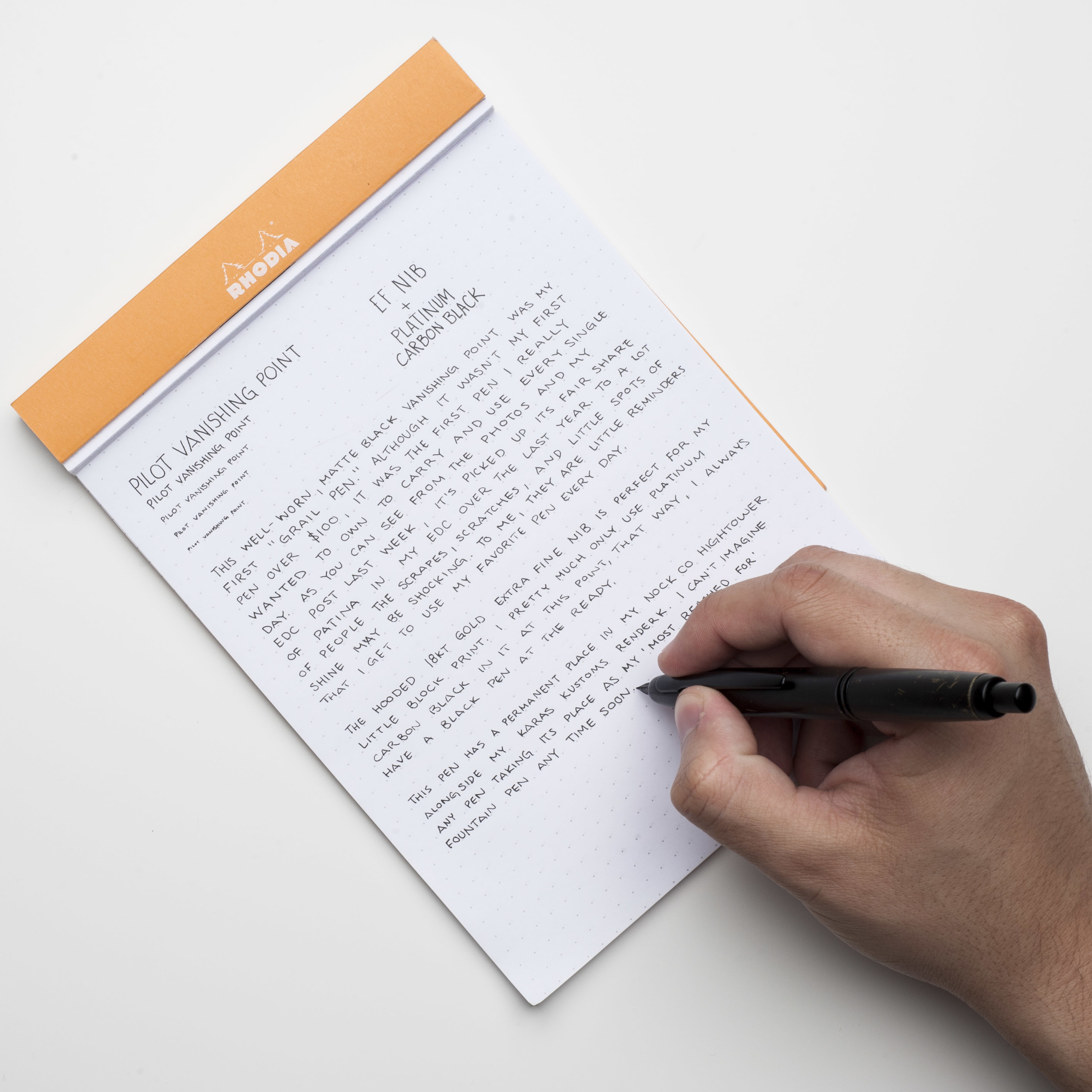 My Vanishing Point stays inked up with Platinum Carbon Black at all times. I love the crisp, dark black of this waterproof ink. Yes, I’m one of those people that likes to match inks colors to pen colors. I’m tempted to try Sailor Kiwa Guro because of how it behaves with Field Notes’ thinner papers. Either way, it’s nice to always grab my black pen and know that it is full of black ink. Since this is my most-reached-for pen and I take a lot of notes during the day, I don’t use the supplied converter. Instead I emptied the supplied cartridge of Pilot Blue-Black and syringe fill it with the Carbon Black. This little change gets me an extra two-or-so days of ink, which is always nice.

For my first grail pen, the Vanishing Point was a reasonable mark and ultimately, the perfect choice. There is a pen that has replaced its grail status, cough Nakaya cough but I will always build my fountain pen load-out around my worn, matte black Vanishing Point full of black ink.

The Vanishing Point has also been reviewed by fantastic pen bloggers like Ed Jelly and Brad Dowdy, so if you’d like more information before you buy the pen I highly suggest their posts as well. 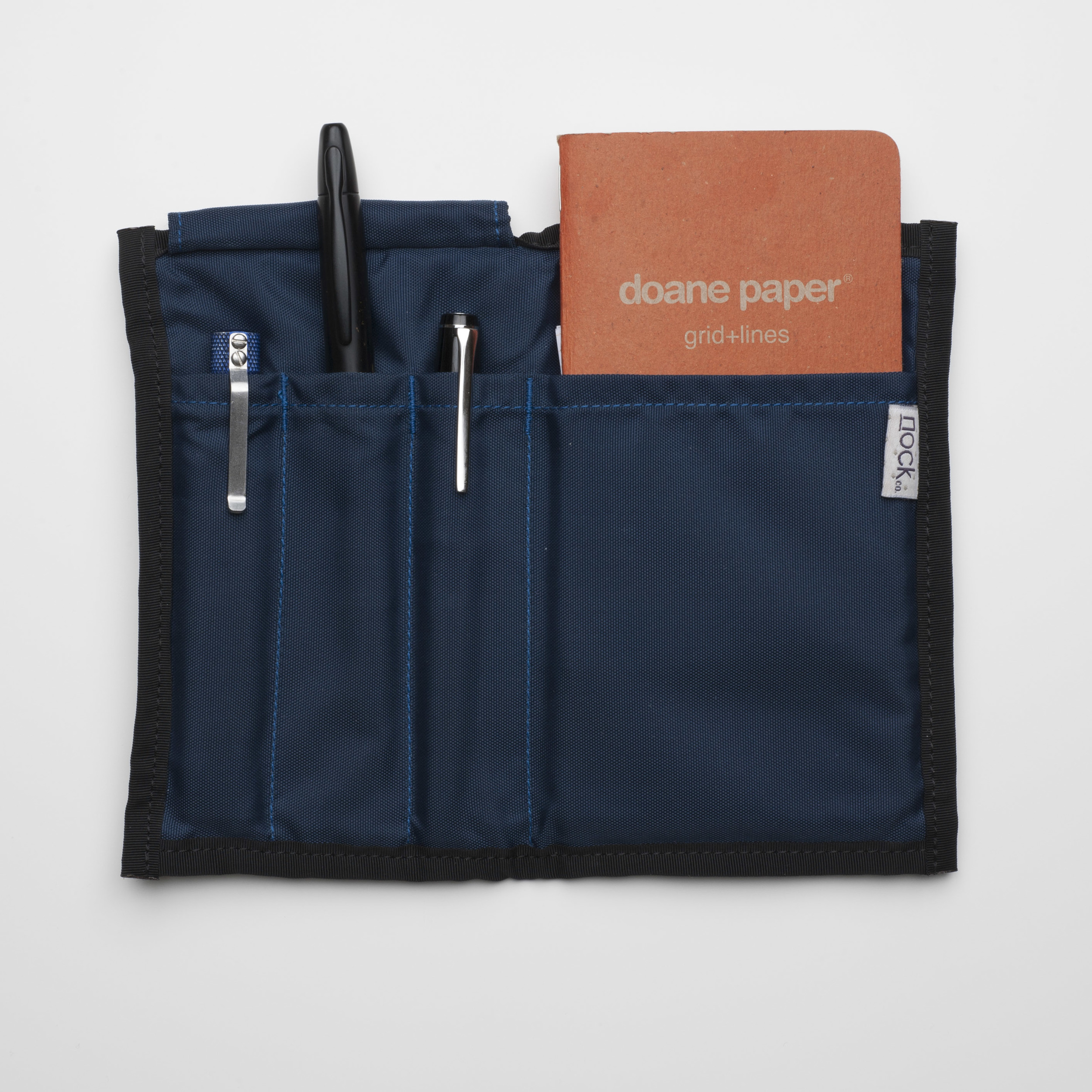